By Dylan Stableford | The Sideshow – 12 hrs ago 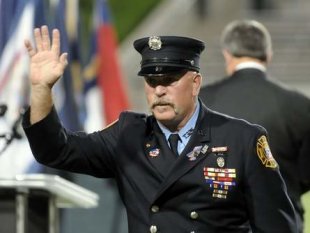 Lifander (Alex C. Hicks Jr./Blue Ridge Now)
A South Carolina man who told his fellow firefighters he was one of the first responders on 9/11 has admitted it was a lie.
Jordan Lifander, a former Cedarhurst, Long Island volunteer firefighter, said this week that he was sorry for telling firefighters in the Palmetto State that he was a captain of FDNY's Ladder 133, which lost 12 men on Sept. 11.
"You know, once you tell one lie, you gotta keep up that lie," Lifander told CBSNewYork.com on Wednesday. "I got all caught up in the whole 9/11 anniversary and just lied. I was not a member of the FDNY, was not a captain in Ladder 133."
Lifander "did not survive the disaster any more than those of us who watched it on television," CBS 2's Lou Young wrote.
Dressed in a uniform with an FDNY patch, Lifander spoke at a 9/11 memorial service in Spartanburg, S.C., last year, telling the crowd he attended "47 funerals in three weeks for brothers who died that day." He received a standing ovation.
According to the  Spartanburg Herald-Journal, current and former New York City firefighters contacted the paper on Monday saying Liflander's story was a "sham."
When contacted by the paper, he said he had been "trying to get out of the situation" and "got caught up in the moment."
"I wanted to represent what everybody was honoring that day," he said. "I told it from a New Yorker's point of view."
"It was that whole thing about portraying something I wasn't," Lifander told CBS 2. "The ego, the lie, keeping up with it, a very big mistake ... It just snowballed into something that was out of my control. I'm truly sorry for misleading and lying."
"I'm outraged," Bill Youngson, former captain of Ladder 133, told BlueRidgeNow.com. "I'm sick and tired of people standing up and telling people these stories for a little bit of glory. People have cancer, I have asthma and we paid our dues. In six months, we buried more people than you've ever seen and to read this story—this lie—it has to stop. Put that guy on the wall of shame."
"It's sad, and it's disgusting," Billy Goldfeder, deputy chief of Cincinnati's Loveland-Symms Fire Dept. who runs FirefighterCloseCalls.com, told Yahoo News. "There's nothing more sacred than a firefighter's death in the line of duty death. It doesn't get much lower than what he did."
Firefighters at Lifander's former Long Island firehouse are, understandably, livid, too.
"It's a terrible situation," Cedarhurst FD capt. John McHugh told CBS. "I feel bad for the people of South Carolina and I feel bad for the people in the whole 9/11 system."
"It happens a lot because they want to get that hero worship, people telling them 'thank you,'" former FDNY deputy chief Jim Riches added. "It's a sick mind, but he's not the only one doing it. It's out there and I think people should verify who's actually speaking to them."
It's not clear if Lifander is currently a firefighter in South Carolina. A call to Lifander's home was not immediately returned.
The only positive news to come out of this--if there is some--is that it does not appear Lifander used his faux FDNY status for financial gain.
"We've seen 9/11 imposters before, but usually in connection with attempts to defraud the 9/11 victims' compensation fund," Young wrote. "It appears that [he] was interested in glory and not money."
Goldfeder added: "Hopefully, if any good comes of this, it's that people will do some work to verify who they get to speak."
Posted by Bob at 11:35 PM