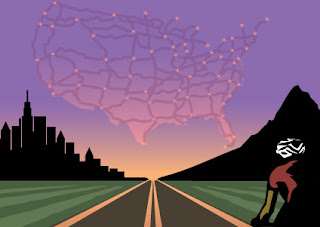 We ride to honor America's heroes, our firefighters.
Our journey will take us through 16 states and Washington, DC. US Highway 50 is our primary route.
US Highway 50, the central most transcontinental route in the United States, is one of the nation’s most historic roads. It spans over 3,000 miles as it stretches from Sacramento, California in the west to Ocean City, Maryland on the Atlantic coast.

As we bicycle across this great country, we will encounter the Pony Express Route, pass through iconic wild west towns and across a stretch of Nevada where signs proclaim it “The Loneliest Road in America”. We will bicycle over the Continental Divide, across the Great Plains and the Mississippi River. We will bicycle through farmland, villages, towns, suburbs and historic Civil War battlefields.

Though officially formed in 1926, when the American Association of State Highway Officials and the Department of Agriculture’s Bureau of Public Roads created the US Highway system, Highway 50, like most of these routes, was fashioned out of existing roads.

In many areas, Highway 50 follows former Native American paths, trade routes, pioneer trails and horse-and-wagon turnpikes, and passes through some of the United States’ oldest settlements and pioneer towns.


We are excited about our once-in-a-lifetime adventure.
Bookmark our blog, http://www.honoramericasheroes.us/.
Follow us on Twitter
http://twitter.com/bicycleblogusa.
Posted by Bob at 12:30 PM